… they lie for all eternity; a tribute to the courage of man and a testament to man’s savagery.

‘Who were they?’ a young child asks as we stand and stare out over the rows of crosses. ‘Had they done something bad?’
The mother shushes her, leading her away from our group and back to the coach, talking softly to her. Two of the middle aged women in our party exchange looks that clearly cast aspersions on the woman’s child rearing skills but the rest of us don’t react. I dismiss the little girl’s words and concentrate on what our guide is saying about Ypres. I manage for a while until he tells us that first major battle fought here took place just three months into the war, when they still thought it would be all over by Christmas. I tune out then, his words making me think of the timescales the modern day “Allies” spoke of when we first went into Iraq and Afghanistan. Nothing much changes, does it? I shake my head and try to pick up what he’s saying but now the little girl’s voice is echoing through my head, refusing to be ignored.

So I too leave the group, but I don’t follow them back to the coach. Instead I walk down to the nearest cross and crouch in front of it, reading out the inscription.
‘Private Burke,’ I say softly, tracing the words with my finger tips. ‘Killed in action 13th October 1914.’
I try to say something appropriate to this man I don’t know, to somehow try and explain that I’ve come here because I am grateful for the sacrifice he and all those surrounding him made. I can’t though, every sentence that presents itself for my attention sounds trite or false.

I don’t know how long I’ve been crouched here but can’t move yet, despite the fact that my legs are protesting vehemently. I still haven’t answered her other question – had they done something bad? Of course not, I think, they were all good men. I shake my head, immediately disagreeing with myself. They can’t all have been good, these thousands upon thousands who died for our freedom. Just like they can’t all have been bad. She didn’t mean that, I realise, remembering that she could have been no more than five. She was asking if they deserved to die.
‘No, they didn’t,’ I say, uncaring if anyone else is listening. ‘Not like that.’

I don’t want to think about the manner of their deaths so instead I wonder what this soldier was like. My brain pulls up random facts from history lessons long ago, documentaries I’ve watched and books I’ve read. Slowly a picture begins to form in my mind of a man, no, a boy – probably one of the ones who lied about their age to join up – unprepared for life let alone war. I know I’m romanticising but I can’t help it. I’ve seen too many grainy black and white photos of happy, smiling lads at the recruitment offices not to give him one of their faces. I see him standing in the mud sodden trenches clutching a gun he’s only just learnt how to use and trying to convince himself that God will protect him. After all, they are doing Gods work here, aren’t they? Just like Sarge said. I wonder if he prayed before he went over the top.

I stand up abruptly, trying to dispel the images that follow, of guns and shells and shrapnel, blood and pain and then nothing, nothing for ever more.
‘I’m sorry,’ I say inadequately, resting my hand on the top of the cross. ‘I’m sorry we haven’t learnt our lesson yet.’ 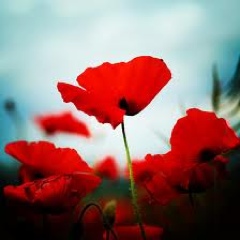 Originally written as a guest post for Baglady’s wonderful blog back in May – check her out here: http://baghabit.blogspot.com/

3 thoughts on “In foreign fields …”