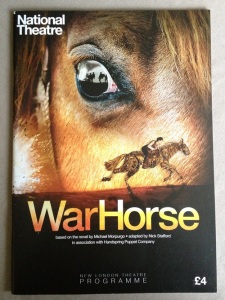 War Horse, based on the beloved novel by Michael Morpurgo, is a powerfully moving and imaginative drama, filled with stirring music and magnificent artistry. South Africa’s Handspring Puppet Company brings breathing, galloping, full-scale horses to life on the stage — their flanks, hides and sinews built of steel, leather and aircraft cables. Experience the emotional journey that charges through the battlefields of history straight to hearts of audiences around the world.

That I should go and see this whilst I am in the midst of researching WWI will not come as a surprise to anyone. Neither, I suspect, will the fact that I was blown away by it.

The use of light and shadow, along with the wonderful sketches projected onto the huge strip of scrap paper (apparently torn out of Captain Nicholls sketch book) captures the essence of each place without the need for large pieces of scenery or elaborate sets. I think this is more effective in getting across the ravaged wasteland that the trenches became more effectively than many films I’ve seen, because it forces the audience to conjure it in their own minds and thus it becomes more immediate and more intimate.

And then there is the puppetry. When Joey (the horse, for anyone who hasn’t read the book) first appeared on the stage it took me a few minutes to adjust from watching the puppeteers to watching the puppet itself but mostly because I was completely entranced by just how they were manipulating it as it really was moving like a real foal. Then I got caught up in the story and forgot they were there – I was watching a horse grow and learn and bond and then experience things I wouldn’t wish on my worst enemy, never mind an animal who didn’t understand why these things were happening. It really was spellbinding.

The use of song throughout, both to tell the story and tie the scenes together was wonderful and the melodies have been echoing through my head ever since. The cast, too, were excellent and at no point did I doubt any of the characters I was presented with, nor the things that they were experiencing.

I cried. A lot. At various points during both halves and, each time, I was aware I wasn’t the only one. This was especially true at the end. As the lights came up I noticed more than a few men blinking wildly and trying to surreptitiously wipe their faces. I have to say that it was also a good job I was right in the middle of the second row of the circle as, during the scene showing the initial recruiting for army just after war had been declared I found myself wanting to march on stage and shake some sense into the men who were talking about glory and justice and it being all over by Christmas. It’s amazing how much emotion can be elicited by so few words.

I think it is probably needless for me to say but say it I shall; War Horse really is a must see show, both for the fantastic staging and the story, the poignancy of which will only increase as we move toward the 100th Anniversary of the outbreak of WWI.

If you are only going to see one show in the next year, make it this one – I promise you won’t be disappointed.

War Horse is now booking until February 2014 at the New London Theatre (as well as various other venues I believe). You can book tickets and find out more here.