Well, there seems to have been an awful lot happening but I don’t have much to show for it. I wrote and posted last Thursday’s instalment on a train on my way to spend the weekend in London. That particular journey is an annual pilgrimage to attend the service at the Cenotaph on Remembrance Sunday, but I always seem to do much more than that.
Thursday evening, once my stuff was stowed away in my hotel room, was a lovely catch up with a friend from Uni who I don’t see as often as I’d like. We ate chips, drank wine (or beer in his case) and generally set the world to rights. This included him managing to explain what Picasso was getting at with his cubism in a way that made it make sense – which is quite an achievement since I am not known for my love of modern art – and me persuading him to visit the Museum of London Sherlock exhibition with me in December. All in all a most successful and happy evening.
Friday involved a lazy morning in the coffee shops in the vicinity of the hotel followed by theatre – Private Peaceful and then War Horse. War Horse was as wonderful as the first time I saw it (link to my review here, if you need more convincing), Private Peaceful … well, it didn’t work for me. Since I tend not to review things I haven’t enjoyed I won’t say any more, but I will say that it certainly got the school children who were attending talking about WWI, which I suppose is really the whole point of the NYT productions.
Saturday was an early start to see the Tower Poppies again before the crowds got there. Unfortunately my iphone decided to play silly buggers and the photos I took are no longer in existence. However, it doesn’t matter and the memories are unlikely to fade for some time and I’m so pleased I had a chance to go back and see it again almost complete – a truly stunning tribute to the 888,246 members of the British and Commonwealth Military killed during the four years of fighting.
Then there was the visiting of friends:
Bryony and her hubbie Ben were first. They are patiently awaiting the arrival of baby number 1, who is due tomorrow! I can’t be a Godmother on account of being the wrong religion so I’m just going to be Auntie Kim instead, and tell little one fairy tales, take them to all the best museums, teach them to sword fight and shoot and paint and write and … yes, I’m determined to be the best babysitter going!
Then I met up with Elinor and her sister, who I’d not met in person before. They were so very lovely and we chatted about all things Holmes and Watson, and London, and writing, and our respective pets. It was a very pleasant hour, only spoiled by the downpour on our exit from Pret.
The evening was another theatre trip – this time The Trials of Oscar Wilde – and unfortunately this was another production that didn’t really do it for me. I’m not sure whether it was the fact that I knew the material already, or that I didn’t really believe in some of the characters, but either way I was disappointed.
What I was not disappointed by, however, was my Sunday morning at the Cenotaph. Although it was far busier than normal, with security at fever pitch, and I therefore didn’t manage to reach my normal spot despite arriving at 7.45am, it was the best experience I’ve had there. The atmosphere was unlike any I’d experienced, I made a few new friends, waved at some old ones, and felt privileged to be a part of the service.
There were some really touching moments with the people participating in the march past – I was standing opposite Downing Street and so right next to the waiting columns – plus some moments of proper army humour with the veterans standing either side of me in the crowd. I learnt a new name for the feather the Fusiliers wear in their caps and passed the “she’s not just a pretty face” test I didn’t know I was participating in, at least as far as identifying regiments and being able to sing WWI marching songs go, at any rate! 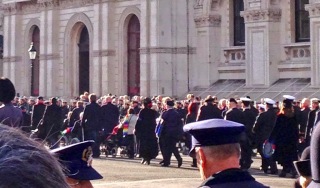 I had feared it would rain on us (for the first time in three years) and packed waterproofs accordingly but we were lucky and by the time the Queen and other “dignitaries” had laid their wreaths the sun had come out properly for the march past, which made me very happy. I do have to admit the warmth was welcome at that point, since my toes were going numb despite the boots and thermal socks!
The rest of the day involved having lunch and a good chat with Val in the café at the top of Foyles bookshop and then going back to my room and getting some writing done – less than I’d hoped as I ended up falling asleep – apparently standing for 6 hours straight is tiring!
The rest of the week has been far less eventful, although Narrelle did – very kindly – help me immensely by pointing out exactly why the two original fics weren’t working despite everything I was trying. I have had to pretty much go back to square one with both of them but at least I’m now telling the stories I want to tell rather than failing to tell the stories I think other people might want to hear.
Work remains busy. Dog remains daft.
Christmas is now only six weeks away.