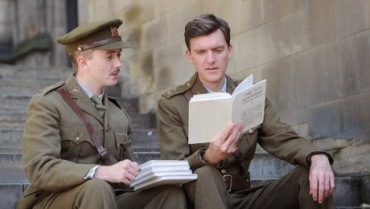 This is going to be an extremely short review but one I want to share nevertheless, because this has to be my favourite WWI theatre experience this year, with Regeneration coming a close second.

If you were looking for a link between the two, you wouldn’t have to look far, as they both involve Siegfried Sassoon and Wilfred Owen. However this play is just about the two of them. Only about the two of them. Only two actors in the whole production, in fact. It weaves biographical fact, poetry and speculation into 2 hours and 20 minutes of stage genius and you definitely need to take your tissues.

The title of the play comes from Owen’s preface to his first published volume of poetry and yet, to me, this play is about heroes – two men who tried to do what they believed to be right and to say exactly what they thought about the war as they experienced it. It’s a play about courage and fear, creativity and honesty, and, to steal another phrase from Owen, the pity of war.

Studio 2 is an incredibly intimate space in which to stage it and lifts the beautiful script (it won the Fringe back in 1982 when it debuted there) and exquisite acting to a higher plane. I was completely spellbound and I didn’t want it to end.

If you can get to see this before the run ends, do! You’ll find the booking page here. 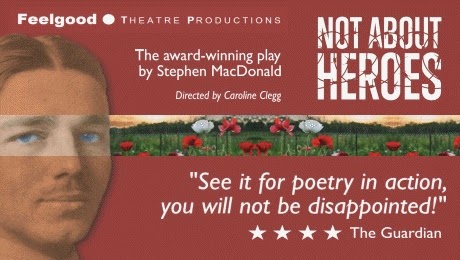 One thought on “Theatre Review: Not About Heroes – Trafalgar Studios”