Another update written on a train!

This time on my way to London for a Q&A session with Judi Dench, thanks the wonderful Katri giving me her spare ticket. There’s now a small review for this (yes, I’ve edited the post) and you can find it here if you’re interested, but otherwise, this is what the rest of my week has been like.

I can describe it in a word – CHRISTMASSY – and I didn’t even need to hyphenate!

Friday saw me taking the day off work to go to Attingham Park’s Frost Fair with Mum & Dad, followed by lunch in the Shrewsbury Loch Fyne and then a perusal of the shops. Attingham Park is a National Trust property and they have been putting on a Frost Fair (christmas market with all local traders, named for the winter fairs that used to be held in Tudor/Elizabethan England actually on the rivers when they froze solid from bank to bank – Attingham has a tributary of the River Severn running through it, although I don’t think it’s been frozen over in living memory) for at least five years. There are three huge marques in the grounds full of brilliant little stalls, as well as their NT shop, second hand bookshop and cafes. I managed to pick up a few presents, imbibe some Mulled Wine and generally have a glorious start to my Christmas. Mum and Dad really enjoyed it too, and we took home some delicious pies and breads to consume over the weekend.

We’re also doing the Cabin Pressure Advent listen-along, which started on 28th November so that Yverdon-Les-Bains would be reached on 22nd, the day before Zurich Part 1 airs. Mum and Dad have never listened to the show before (although they’ve heard me quote it enough that they didn’t require any explanation of what it was) and it’s glorious to see them hearing the episodes for the first time! Dog, unfortunately, seems not to like them quite so much, as she’s insisted on barking at inopportune moments during each one so far!

Saturday involved a trip up the loft ladder to liberate the decorations and then quite a lot of fun with an artificial tree (that is now twelve years old and still soldiering on), lights, tinsel and baubles. I’m quite pleased with the finished result in the living room (the hall & dining room will be done next weekend): 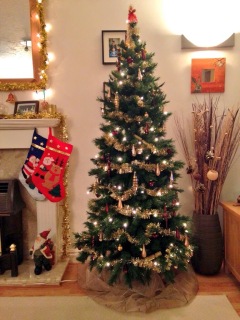 Sunday was a day of relaxing. The sun shone beautifully for my morning walk with Dog:

And the rest of the day continued in a pleasing vein. I got a significant amount of writing done – hitting my NaNo target (whoop!) and getting that commando!John short story I’ve been whittering on about for weeks out for beta. I’ve had it back and with a few more tweaks it’ll be good to go so I’ll be posting it tomorrow.

In other writing news, all the prompt slots for my “Twelve Days of Ficmas” have been filled, too, so I’ve lots of jolly things to be getting on with. Huge thanks to all of you who left me a prompt!

The rest of the week has been (other than the cough and cold that tried to fell me on Monday and meant I missed seeing Cat for Pizza) dominated by work, and I mean that in the best way possible.

On Tuesday a group of us spent two hours carol singing for Barnardos (it’s our company charity) and raised £190 – which left me glowing with pride as well as pleasure at singing loud and long!

Wednesday, however, was the really good day, because I had my PDR; annual performance review for those of you who don’t speak corporate jargon. The upshot was that my boss told me I couldn’t have had a better year and he’s spoken to HR about my requests in respect of my future role and renumeration.

In short, I’m feeling quite good about myself professionally as well as personally right now!