Despite the lack of posts for the last two weeks I can confirm that “I aten’t dead”. However, unlike Granny Weatherwax, who simply doesn’t seem to get sick, I have been ill.
Am still ill, actually, although far better than I was. A cold, with the joyful addition of a vicious chest infection, completely wiped me out for the best part of two weeks and I’m still sniffling, sneezing, nursing my aching joints and generally feeling like a limp dishrag. But, on the bright side, at least I’m not coughing my lungs up every five minutes any more. So this not going to be a long post, for the simple reason that I’m not feeling up to stringing words together to form pleasing sentences, never mind sentences into paragraphs.
I do have a few bits of new work though:
1. My WWI: fifty two months, fifty two posts for January did get posted on time (by the skin of my teeth and the consumption of much lemsip) and can be found here, if you’re interested.
2. I’ve also re-started, very slowly, on my Fighting John Watson’s War blog (the one where I look at how BBC canon could be read to give John the backstory of a doctor who then joined the army rather than an Army Doctor) and thus there is a small post here on an alternative interpretation of John’s mug with the RAMC insignia on it.
In respect of writing, and of my participation in the Get Your Words Out challenge in particular …
Well, I hit my January target of 17,200. Just.
I ended up with 17,987 words in total but that was only thanks to me having spat out a huge number over the weekend I was in London. If I hadn’t had that cushion then the two weeks of bed rest mixed with futile attempts at doing the job I’m paid for (either in the office or at home) that sapped all creativity out of me would have meant falling over at the first hurdle. That said, I’m already behind in February, because I’m still not functioning. I should have produced 2,550 by the end of yesterday but all I’ve managed is a measly 1,086. Plus I was supposed to be spending this weekend coming at a writing retreat and I’ve had to abandon that as well, because I’m just not up to it. All of which has combined to make me a rabbit of extremely negative euphoria.
In other news, Dog is limping again, although giving no other sign that she’s in pain. She’s running around, jumping and bouncing,  but doing so with her front left leg lifted up a bit. I believe this is due to arthritis in the joint she badly damaged as a puppy – it gets more pronounced with each drop in temperature – but I’m not certain. I’m already giving her pedigree joint sticks in the hopes that this might ease the ache but if anyone has any other suggestions please let me know. Dog is counting on one of you to suggest sirloin steak three times a day, judging by her expression.
Dog is also rather taken with the fact that Bunsen (Ian Hallard  & Mark Gatiss’s Labrador) has managed to snag a bit part in the Sherlock Special. I believe she is plotting her own invasion of the small screen, as evidenced by these cute poses I captured the other day. 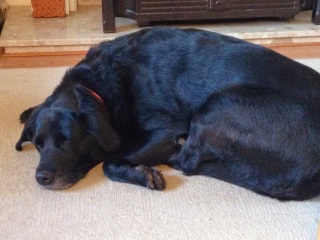 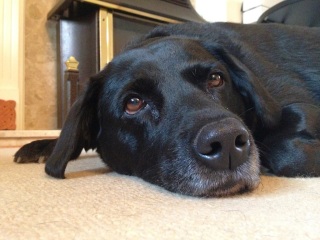 Anyhow, I’m now returning to my blanket cocoon of delicious warmth with a lemsip and a good book. Such is life.