There are a myriad of things that make this one of the best independent and specialist bookshops in the country. Apart from being the only one in the UK which solely supplies LGBTQIA works, it is excellently  stocked, easy to navigate, and run by Uli, who is kind, engaging, knowledgeable, enthusiastic, and very patient.  It is not large but it has an enveloping atmosphere of acceptance that makes browsing the shelves a real pleasure; something you hope to find in shops that specialise in a certain type of literature but sadly so often don’t.

To my shame, January was the first time I had managed to visit the shop myself, having walked past it many times before but never having had the time to pop in. I sort of made up for that, since in that one weekend I visited it on three separate occasions, which speaks volumes as to how much I like it. I did get a bit carried away with the books themselves, given that I had to get them back home in a suitcase, but thankfully they offer a shipping service too, so I didn’t need to worry.

The results of my visits were not only this lovely stack of new reading material (some that I’d gone in hoping to find, some that were stickered as recommended and some that were personally suggested by Uli after a conversation about my interests and novel research) but a gorgeous pin badge to commemorate the 30th anniversary of the founding of LGSM. 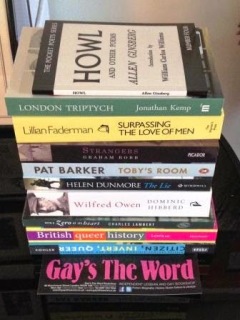 This purchase was especially pleasing because, if you didn’t already know, the story of LGSM has recently been dramatised in the film Pride and they used to meet in the back room of Gay’s the Word in 1984.

Although no filming took place at the bookshop itself – the area that used to be the meeting room and kitchen was changed to more shelving space in 1997 – the shop supplied many of the books that were used on set, as well as talking to the set designers about the original lay out and providing pictures to assist them. In the film, Gethin Blake, one of the founder members of LGSM, owns the shop but this is artistic license on the part of the scriptwriter – Gethin has never run Gay’s the Word.

And that was a short history lesson you never knew you wanted! Which was merely my way of illustrating the sense I had, from the second I pushed the door open, that it is more than just a bookshop. Rather it is a place where you can be who you are, think big, find acceptance and learn. It’s a haven, for people and for literature.

So next time you’re in London, pop down there. It’s merely a hop, skip and a jump away from Russell Square tube station and I’m certain you won’t be disappointed. You can also find the shop online www.gaystheword.co.uk and on twitter @gaystheword

Oh and if you haven’t seen Pride, may I heartily recommend that you do. It’s not in many cinemas any more but it’s already out on DVD in the US and will be released in the UK on 2nd March 2015. My review of the film is here.