Which I’ve decided will be posted on the last weekend of every month because it fits into my schedule better!

Life, the Universe and Everything

Well, it may have been May according to the calendar but Mother Earth clearly didn’t get the memo, which makes me sad, not to mention cold and quite damp. However there have been some beautiful days (between the rain showers and vicious winds that seemed to cut through all clothing as if weren’t there and shake the house to its very foundations) and the trees and flowers have at least been trying to cheer everything up. As is my want, I’ve been snapping photos whenever I can, and I’ve put together a “Best of the Blossoms” album that can be accessed by clicking on the link under this picture:
Writing wise, the muse has decided that it does not give a flying duck that I have three WIPs languishing abandoned, nor does it care one iota that there are more unfinished metas on my hard drive than Irene has enticing outfits in her walk in wardrobe. Oh no. Because they are not BAGGINSHEILD or KILIEL or BARDUIL and therefore are not interesting in the slightest. Which is a rather longwinded way of saying that in the short amounts of time I have free to write, that I’m penning an AU ending of BOTFA. There are clearly three reasons for doing this and you know their names. I have no idea when this will be finished because well, I’m not quite sure where it’s going for one thing, but ladyprydian has said she will beta it when it’s done and I seem to be going at a fair lick, given that I’m barely snatching half an hour a day to write so … expect it when you see it.
In other writing news, my WWI post this month is a brief commemoration of the sinking of the Luisitania and can be found here. I’ve also done a writers craft discussion post on critique for GYWO and, for those of you who aren’t part of the challenge and so can’t see the page, I have also posted it on my Blogger account, if you’re interested.
Speaking of GYWO, I have hit 100k words for the year this month. This puts me well on track to hit my year end target – or would if I wasn’t very aware this rate cannot continue because I must do ALL THE STUDYING. Which is going okay. I’m managing two hours most work nights and six to twelve at the weekends and I’m getting through the material well. Or at least I understand everything I’ve done and I’m not ready to kill anyone yet. This is encouraging.

Musing of the Month

David Nellist (better known to most of you as Mike Stamford from Sherlock) put out a call on his Twitter to ask for volunteers to complete a questionnaire about death to help him with a play he’s writing and, because it’s a subject I’ve been thinking about a lot recently, I let him know I was happy to help and he sent it over to me. Answering the questions generated one of the most thought provoking and enjoyable half hours I’ve had for a long time and I thought I’d share some snippets of my answers with you here:
To me, death means endings. The ending of hope and possibilities. In some cases it is the ending of pain of suffering, in others the ending of happiness and joy. It is not the ending, though, only an ending, and is often worse for those left behind.
In the immortal words of Fox Mulder “I want to believe” in life after death. To be honest, unless you’ve lead a truly terrible life and are frightened by the thought of having to face up to your actions in the next world, how could you not want there to be something more? I have always been very taken with the idea that death is just a path we all must take, a doorway to the next great adventure, a far green country we all get to explore.
I’m scared of not doing everything I want to do before I die, of dying unfulfilled, of leaving things unfinished, but I’m not scared of death. If when you die you are gone forever then I’ll not know about it, if there is life after death then I’ll deal with it when it happens.
I don’t think you can ever truly get over the loss of someone you love. As for describing it, I haven’t yet found a way of putting words on paper that adequately convey it. But I can try once more. Crushing emptiness seems a good place to start. The immediate aftermath of loss has been, for me a crushing emptiness that radiates pain which scores through bone, sinew and brain like a knife. It slashes and cuts until you don’t believe you can ever be healed, ever be whole again. Each breath, each movement, each passing minute hurts unbearably. But as time goes on it dulls. Memories stop reactivating the knife wielding emptiness and start to become a soothing balm instead. The pain does not go away but it fades, aching like an old wound in the winter.
If you would also like to help David and complete the questionnaire then PM me your email address and I’ll forward his email on to you (David has said this is fine).
And now, the bit I am assured you’ve all been waiting for with bated breath ….

THE DOINGS OF DOG

(Dictated by Dog herself – the CAPSLOCK title is to emphasis her importance and the love you all have for her, so I’m told)
This month has far more satisfactory than the previous one since she-who-thinks-she-is-pack-leader has not disappeared off for weeks at a time to strange smelling places and left me all alone, with not a soul in the world to love me. (Your transcriber would like it to be known that Dog had a lovely time staying at her friends house down the road and was spoilt rotten)
I come before you in triumph this month for The Battle Of The Far Fence has been won. After weeks of diligent patrols and the continual deployment of the Warning Bark SystemTM accompanied by the clearly effective Bouncing At The Fence With Hackles Fully Rsised (patent pending), the Evil Interloper has been vanquished and all is quiet in my domain once more. I shall continue with extra border patrols for the time being – the squirrels seem more obstreperous than usual – but I feel the extra treat I have been demanding after tea has been well earnt. (Your transcriber doesn’t have the heart to tell Dog that the Evil Interloper has merely gone into kennels whilst its owners are on holiday. She also has no intention of giving in on the extra treat)
Having comported myself with grace, dignity and beauty at all times since you were last updated as to my doings I have instructed she-who-thinks-she-is-the-pack-leader to put some of those photo thingummyjigs at the bottom of this so that you may all benefit from looking upon such a glorious sight. (Your transcriber has indeed taken some photos of Her Majesty in various poses. I doubt viewing will benefit anyone but still, she is rather cute)
And here endeth my account of my doings for the present as I must away to conduct my hourly border patrol, less the squirrels get any bolder in their incursions into my lands. (Your transcriber is now absolutely certain that she should not listen to the Lord of the Rings audiobooks within the hearing of Dog. If you don’t hear from me again, it will because she’s decided she is neither Dunedain nor Elf and in fact prefers to emulate a Warg)

She’s beauty, she’s grace, she’ll lick you in the face … 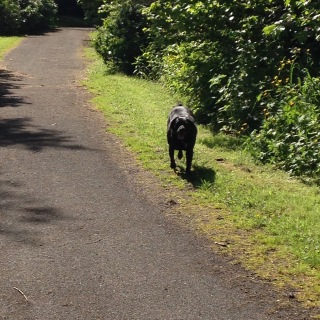 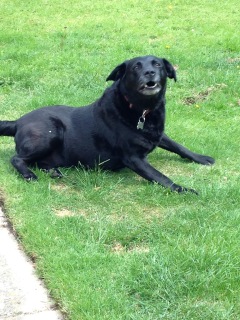