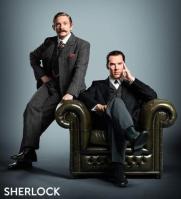 And as I watched it, sniggering gently at That Hat and The Moustache, I realised that I am officially NOT BOTHERED about what happens in it, or where Mofftiss choose to take Series 4. More than that, I absolutely do not give a flying furball about any of the hype the BBC and Mofftiss are trying to generate and keep going until it airs; it’s overdone, ridiculously dragged out and it bores me. Maybe it’s the exhaustion of studying dulling my joy at having something new to look at, maybe it’s the fact I have other things that I’m more passionate about (the ACD canon for one, my work on the Afghanistan Conflict, WWI and the Arthurian Legends for a few others) but regardless, I just can’t summon any of the enthusiasm I felt before Series 3 aired. To be brutally honest the rest of the epsiode could be Sherlock and John dressed in various costumes and breaking spontaneously into bouts of the can-can and I doubt I’d care (although I’d certainly laugh).

That does not, however, mean that I don’t still love the show. I do. But the nature of that love, and the reasons for it, have shifted. Now I love it for what it’s already given me, not what is to come. Thanks to Sherlock Series 1 grabbing me by the lapels and shaking a level of enthusiasm into me that I’d not felt since Merlin, I wouldn’t have found the Sherlock fandom and thus I wouldn’t be about to travel to London next weekend to meet up with a group of friends who mean the world to me. I wouldn’t have over 200k of posted fic on AO3 and various other bits of t’internet that have helped me deal with demons, brought a little bit of joy into a few other people’s lives and shown me that, regardless of the little voice of negativity that lives in the back of my head, I can write. I’ve found other fandoms and things of interest through various people in the fandom and the amount of confidence and happiness I’ve gained in the last five years cannot be measured.

I suppose what I’m saying, in a very long winded way, is that I might not be excited, and I might not be pawing over every tiny detail of the teaser trailer as I would have done two years ago, but that doesn’t mean I’m leaving the fandom or giving up on the show. Certainly not! I’ll still be writing fic (although not until I’ve passed both my exams and even then my output will remain mostly embedded in Series 1 & 2 and pretending Series 3 hasn’t happened) and of course I’ll watch the episodes when they air and will definitely engage in from frantic meta-ing. However I’m not going get upset about the direction the plot takes or try and work out where they’ll be going with it next. I’m just going to enjoy it for what it is and for what it’s given me.

If I’m honest, I think that’s a far healthier place for me to be in right now than to be in the state I was before S3 aired – worried that TPTB were going to “ruin” the show by not giving me exactly what I wanted/expected. After all, this show isn’t being written for my benefit. I’m just bloody lucky that I’ve benefitted so much from being a little part of the fandom.