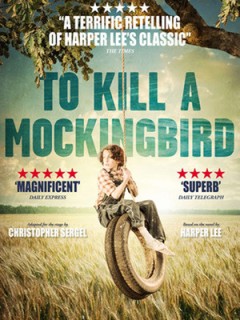 Another production that is on a very well deserved second run, this version of To Kill A Mockingbird was first seen in the Regent’s Park open air theatre two years ago and has transferred brilliantly onto the Barbican’s main stage.
I studied To Kill A Mockingbird for my GCSEs and although I could remember loving the book on my first read through, by the time I’d finished ripping it to shreds in the appalling way all teenagers are required to in order to pass such an exam, my love had palled to something approaching indifference. All I remembered was the sadness inherent in what happened to Tom Robinson and nothing more. Something that explains why – until a friend said she was going as it was her favourite book and suggested I went too – I hadn’t even considered getting a ticket. I’m very grateful to that friend because this glorious production, excellently staged and brilliantly cast, reminded me just how wonderful the book was and brought the joy and optimism of Harper Lee’s words back to life for me.
What this production really is, at its core, is a homage to books and to reading aloud. All the cast are on the stage all of the time, each one has a copy of the book and the story is told through a mix of scenes read aloud straight from the book (often with a musical accompaniment) and scenes acted out.  It may sound strange written down but I promise you is it far from strange when you’re watching and all praise must got to Christopher Sergel for this adaptation; it feels very natural, and almost organic way to tell the story and I would happily have stayed and watched them do it again immediately afterwards, if they’d been willing to do it.
I must say, though, before I urge you all to go and see it before the run finishes, that the magic of this staging is in no small part down to the cast. Scout, Jem and Dill (played by Jemima Bennett, Harry Bennett, and Leo Heller respectively) were absolutely fantastic – pretty much encapsulating the characters as I’d seen them in my head the first time I read the book – and Robert Sean Leonard as Atticus Finch was fabulous. Shout outs must also go to Christopher Akrill (Boo Radley) and Zackary Momoh (Tom Robinson) for exceptional performances. I was also very impressed at how well the whole cast handled switching between their own voices, as they read portions of the book, and their southern accents as they became their characters – there was no point at which any accent slipped, nor any hint that it might be a difficult thing to do! This praise should be doubled for those members of the cast who played two or more characters. I have no idea how they made it look effortless, but they did and they all deserved the standing ovation they received.

All in all, it was a brilliant staging, one that rekindled my love for a brilliant book, and I cannot praise it highly enough. If you can snag a ticket before the run ends on 25th July then do. You’ll need to take a hanky though, I don’t think there was a dry eye in the house at the end!