Oh my life what a month! I have been doing all the study and doing all the things as well. Which means I’ve an absolutely rubbish friend and beta reader and have many apologies to make. So we’ll start with that:
To all the people who have attempted to contact me … I apologise unreservedly for not responding to/forgetting about/generally being useless in the face of emails and stories and life in general. I send you all virtual hugs and the promise that once my exams are done I’ll go back to being my far less scatty and forgetful self. Oh and Chelsey, Sylvester is the sweetest kitty! I want many, many kitty cuddles and thus am charging you to tell him so and give him strokes and kisses on my behalf.

And now on to what I’ve up to:

Short answer – lots! I’ve been studying hard but this month I’ve also been playing quite hard too, and although it’s been a little tiring at times it has helped boost my “can do” spirit and set me up for an August of pretty much “head down and go, go, go”.
The first weekend in July was spent in London, both watching plays and seeing friends. I managed to fit in Gypsy, Oresteia and To Kill AMockingbird, all of which were truly excellent. If you want more details, click on the names and they’ll take you to the reviews!
The weekend after that involved studying and spending time with Mum and Dad, who have been brilliant at the guarding of Dog whilst I have been gallivanting up and down the country. I also managed to sort out my bedroom into something that looked less like a disaster zone and more like somewhere it’s possible to relax and meditate in, which is most definitely a good thing. And I found my first ever pack of Tarot Cards loitering in a forgotten box, which reminded me of just how useful a few minutes of reflection are when you’re panicking about something. I’ve gone back to doing a daily draw (not from my first deck but from the one I received for my birthday) and it’s really helping me to shut down at the end of the day.
The third weekend was the Annual Sherlock Picnic, which was an absolutely brilliant day – the sun shone, there was “Pin The Moustache On The Watson” and much giggling and sharing of delicious food. We then adjourned to the pub, where there was more giggling, a lot of internetting in a circle, and some singing of Disney songs. And no, none of us were drunk! Thanks, as always, to Amy and Trills for taking the time to organise such an excellent day. I don’t have any pics of my own, because I am hopeless, but I think there are enough on tumblr if you search the #SHPicnic and #SHPicnic15 tags!
Since I was in London already, I was able to go the “Bon Voyage” party for Kristina and Sora before they headed off to Mongolia in a very small car, as part of the Mongolian Rally, which they’re doing to raise money for (put the right things in here). It was a brilliant evening in a rather cool pub in Shoreditch that had a whole wall of shelves full of magazines. Shelves which, thanks to Sora knowing the pub owner, we were permitted to peruse and, if we wanted to, take some of the magazines. I now have a few more Marvel comics in my small but growing collection (Black Widow and Cap ftw).
I’d barely got home from London after the picnic weekend before I was headed back to town for my second revision course. The course itself was just as expected, I got a huge amount out of it even if I did end up feeling like an idiot (although everyone else did too). I didn’t do much else – for fear of tiring myself out – but I did manage to see Constellations at Trafalgar Studios before its run ended. I haven’t written a review for this yet, and I probably won’t because – like String Theory itself – I have too many possible avenues to explore to make a coherent post. I must say, however, that Louise Brealey and Joe Armstrong made the play (because although the script was fantastic, if the acting wasn’t up to it it would have died a very slow death) and it made me laugh, cry and cycle through nearly every emotion known to man. Sheer brilliance that I’m very grateful to have witnessed.
Study-wise, my evenings have turned into less of “learn all the things” and more into “learn all the ways you can misinterpret the exam questions”. This is quite a disheartening thing (see idiot comment above) but I’m assured that the more questions I do, the less misinterpretation will happen and the less hopeless I will feel. I am clinging to this lifeline with all the positivity I can muster! It is now nine weeks and a few days until the first exam. This is not frightening in any way, shape or form. Nope. Not at all *quakes gently and tries not to bite nails*
Writing-wise … yeah, something had to give and that was pretty much it. I’ve been writing thoughts and scraps of plot down as they come to me, so I’m not completely lost for words this month, but I’ve not written anything (other than the few reviews above, my WWI commemoration post – which is here if you’d like to read it – and this monthly update) so I do feel a bit out of sorts. That said, I don’t have time to be swept up by any plot bunnies at the moment, so I’m just going to be grateful for small mercies and keep jotting when I have a few minutes.
I’m afraid that THE DOINGS OF DOG are not forthcoming this month, for the simple reason that Dog read my praise of Sylvester the Cat and is now sulking in the corner, refusing to dictate anything at all. I apologise to you all for this interruption to normal service and I will make sure that I don’t make the same mistake next month, so the communication you value so highly will be resumed. In order to recompense you all for your suffering, I offer two cute pictures of Dog instead: 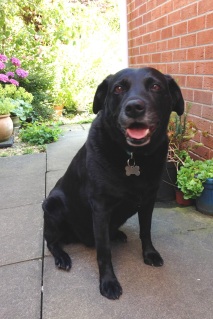 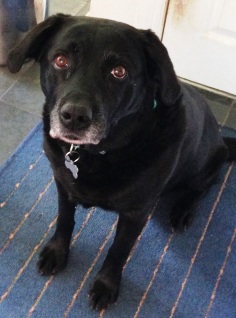 Hope you all have a lovely August. If you’re off on your holibobs have fun and take care!