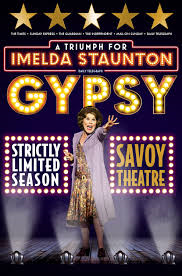 I’m late to the party with this one, because this the second run of this particular production, brought to the West End after an incredibly successful first outing in Chichester. Needless to say I’m very glad that they managed to bring it to London (although I could have done without London prices) and I loved every single second of it.

Gyspy the Musical (lyrics by Stephen Sondheim) was loosely based on the memoirs of Louise Hovick. The musical charts the early life of Louise and her sister June, which was dominated by the ambitions of their mother Rose, and follows Louise’s subsequent rise to fame as burlesque dancer Gypsy Rose Lee. It’s a bitter sweet story (although I have no idea how it matches to reality) that works beautifully as a musical and certainly swept me away from the opening few notes. But what really made it pop for me was the cast. God, what a cast! Imelda Staunton was absolutely amazing as Rose, Louise’s mother. I had no idea she had such a marvellous voice as well as being a fantastic actress and I was spellbound every time she sang. Then there was Lara Pulver as Louise, who managed to perfectly capture both Louise’s initial shyness and body-consciousness and her final, sizzling confident self. Add that to Peter Davidson as long suffering Herbie and a brilliant supporting cast and there’s absolutely nothing not to like.

It’s not the cheapest productin in town (nor is the most expensive – Book of Mormon, I’m looking at you) but for me it was worth every penny. I got lovst inthe story and left the theatre grinning from ear-to-ear, humming the tunes. It’s on until November this year so you’ve plenty of time to catch it. I really hope you can!