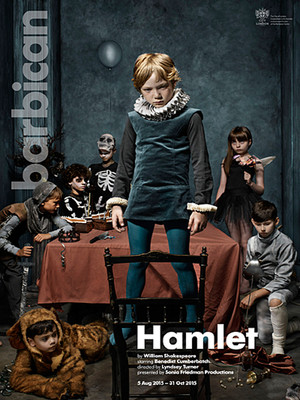 Both for Benedict and for everyone and everything else in the production. This is Hamlet on the grandest of scales!

Benedict managed, unsurprisingly, to give me everything I want in my Hamlet as well as aspects of the character I had no idea could be there. I’m wanting to gush about all sorts of bits and pieces but I’m determined not to do so. This isn’t supposed to be a review, just a reaction, but the level of detail in the staging and the way they combined what could have been such disparate elements so convincingly…. yeah, I’m going to stop here before I start spilling spoilers re set design, costume and scripting choices all over the page.

What I will say is that those idiots from the Times and the Daily Fail who reviewed on first night have (aside from showing they have no respect for theatre etiquette whatsoever) written reviews of a play that no longer exists. Many of the “issues” (in quotes because I doubt they were actually problematic, just different from what had been expected) that Kate Whatever-she’s-called from the Times was wittering on about have been changed and, as far as I can tell, there will probably be more changes during the remaining preview period. This is unsurprising given the scale of the production and the style of the play, and is absolutely what a preview period is for. I would have been more concerned if they hadn’t changed anything.

I should also say that I saw the play in the company of my parents – neither of whom either go to see Shakespeare plays very often or are huge fans of Benedict – and I will admit to being a bit worried about whether they would enjoy it. I’m so glad they came with me because their reactions to it were almost better than the play itself; expressions of amazement in both the interval and at the end and on their feet at the same time as me for the standing ovation (which was echoed by the rest of the audience). Afterwards they both said it was wonderful, that they didn’t have any problem following what was going on, and were full of raptures for the acting of the entire cast and the gloriousness that was the set.

So, I’ll say no more for now (there’ll be a full, spoiler filled review from me after I’ve seen it for the second time on September 10th), other than that if you aren’t lucky enough to have tickets, do try and get yourself to the cinema for the live broadcast (15th October in UK, other dates internationally). I promise that it will be worth it!