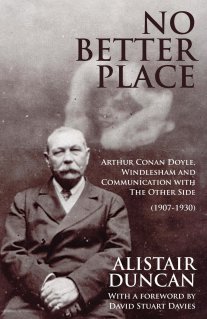 Summary: No Better Place: Arthur Conan Doyle, Windlesham and Communication with the Other Side (1907-1930)
Following his second marriage in 1907 Arthur Conan Doyle was looking to the future. The years ahead would see the birth of three children, fresh literary success and the discovery of his new faith. Those same years would also see the First World War, the final adventures of Sherlock Holmes and ridicule from the religious and scientific communities for his beliefs.
“No Better Place” is Alistair Duncan’s third book that charts a section of the life of Sherlock Holmes creator Sir Arthur Conan Doyle and covering the twenty three years before Sir Arthur’s death in 1930. You do not need to have read the two preceding books in this series (The Norwood Author: Arthur Conan Doyle & The Norwood Years 1891-1894 and An Entirely New Country: Arthur Conan Doyle, Undershaw and the Resurrection of Sherlock Holmes) in order to appreciate this beautifully articulated look at Sir Arthur’s twilight years but I nonetheless recommend them to you, since they are equally as well written and illuminating. However since they’re not the topic of this review I’ll stop digressing and get to the point.
In these pages you will find a detailed, but never dry, map of Sir Arthur’s life that is as illuminating as it is surprising. The level of dedication to his new found religion, Spiritualism, meant that Sir Arthur’s last year were full of sometimes frenetic activity and much of it centring on a belief that many of us now find hard to understand. Alistair makes clear in the preface what his own views of Spiritualism boil down to, and yet the book does not follow in that vein. Like all the best biographies, the pages are free from the judgment of the author, and simply use the facts and careful prose to paint the best picture of the subject possible from the material at hand.
And what a picture we are given. Having picked up the book with only vague (and I now realise mostly incorrect) notions of what Sir Arthur did in the years after he left Undershaw, I put it down feeling more connected to the man who created my favourite detective than ever. I may not be able to share his beliefs but I cannot help but admire Sir Arthur for his unswerving adherence to Spiritualism and his willingness to back that belief up with words and deeds and I will be forever grateful to Alistair for being the one to share this side of him with me.
In short, this is an excellent biography of the final part of Sir Arthur’s life, well worth both your time and your money. I heartily recommend it to you.
You can find Alistair Duncan’s blog here and No Better Place is available on Amazon UK here and, as they say, from all other good booksellers!