On 12 February 1916, in the trenches at Ypres, the first edition of The Wipers Times (sub headed Salient News because no-one should ever pass up the opportunity for a pun that good) was printed and distributed. This was not the only trench publication that sprang up during the war but it is the most famous and, I believe, the most long lived; travelling from Ypres, to Neuve Eglise (The New Church Times), Kemmel Hill (The Kemmel Times), the Somme (The Somme Times), back to Ypres and then off around various other parts of Northern France (The B.E.F. Times).

Every single one of the 23 editions produced were created by the same two man team, Captain F. J. Roberts and Lieutenant J. H. Pearson, who were editor and sub-editor respectively. They, together with the men who made the “requisitioned” printing press run, wrote articles for it and distributed the finish product, helped relieve some of the tedium and terror at the front line. The articles were irreverent, amusing and serious by turns and each paper is a joy to read from start to finish. 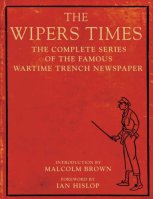 I recommend that you get hold of the book containing all the editions of the paper and have a read yourself – The Wipers Times: The Complete Series of the Famous Wartime Trench Newspaper – to see just how gloriously cynical they are.

The story of how the paper came into being and its life (the final edition was printed on 1 December 1918 under the heading The Better Times) is no less interesting or amusing than the editions themselves. If you’re interested in finding out more, I suggest you start with the BBC Dramatization, written by Ian Hislop (who made a Radio 4 documentary about it and also wrote the foreword to the book I mention above). The show boasts an excellent script, a fantastic cast and incredibly accurate depictions of wartime and I suspect Roberts and Pearson would have approved.

I can’t write this post without mentioning two things. The first is something that Ian Hislop (in both foreword to the book and the dramatization) drew my attention to, and that I find both incredibly telling and deeply amusing; Roberts and Pearson turned “Are we as offensive as we might be?” – the oft repeated question from staff officers at headquarters when the men on the front line were not showing sufficient willingness to go “over the top” at the drop of a hat – into an editorial catch phrase. I can only imagine just how annoyed the staff officers would have been to find out to what use their words were being put!

The second, which will not, I suspect, surprise any of you to know that, is that my little fannish heart has a special place for the serialisation of the story “Herlock Shomes at it again – Shot in the Culvert”. The start of this story appeared in the first ever edition, playing out in its entirety across the next five.

In the spirit of the serialisation, I shall faithfully reproduce Chapter 1 of the story below and then, on the exact dates the continuations were published, I shall reproduce them too.

I don’t pretend that it’s the best pastiche ever written (it rambles something chronic) but it makes me smile all the same (well, up until the last chapter at any rate):

Herlock Shomes at it Again.

SHOT IN THE CULVERT

The wind was howling round the rugged spires of the Cloth Hall, and the moon shone down on the carriage bringing the elite of the old town to the festivities arranged to celebrate the 73rd term of office of Jacques Hallaert, the venerable mayor of Typers. Also the same moon shone down on the stalwart form of Intha Pink, the pioneer. He sighed as he passed the ‘brilliantly lighted’ scene of festivity, thinking of days gone by and all that he had lost. As he plodded his way, clad in gumboots, thigh, paris one, he soliloquised aloud thus: – “What a blooming game! They gives me a blooming nial, they gives me a blooming ‘ammer, and then they tells me to go and build a blooming dug out.” At that moment Intha fell into a crump-hole and then continued his soliloquies thus: