And are also going to be very short because I leave for a three week retreat – no internet, no social media, just me, space to think, and some beautiful places to walk whilst thinking – tomorrow and as yet I have not packed a single scrap of clothing.
This month, well, all two weeks of it so far, has been one of house happenings. The requirement to replace the fence involved much painting in the hail and rain over the bank holiday weekend, but resulted in a beautiful back of the garden once it was completed.

However the piece de resistance occurred at the start of this week, and caused my days to be mostly filled with plumbers and panic (although not necessarily in that order). I arrived home on Monday night to find my smoke detector dripping alarmingly onto the hall carpet. Five minutes later, having run around the house turning off the water and failing to determine which of the bathrooms it was that had sprung the leak in the first place, I call Direct Line’s home emergency and they sent a plumber out to me that evening.

For those of you who follow me on twitter, the saga that followed is already known to you, so I’ll be brief; there was much to-ing and fro-ing of plumbers, there was an obsolete, badly fitted shower pump that needed replacing and there was Direct Line, who after their initial brilliance, became useless and their inability to communicate made my stress levels over the whole thing a thousand times worse. However all is now well, except for the still damp plaster and the modern art water stains that are covering my hall ceiling and I have received a fulsome apology from Direct Line’s customer service team, so the saga has ended on a good note
What I’m far more excited about is my retreat, which I’ve had booked for about six months and has been the shining beacon of hope when I was floundering the seas of study and stress. From midnight tonight I will be off the grid, unreachable except in the direst of emergencies. I’m hoping that taking this time away from the normal day-to-day grind will allow me to deal with several aspects of my past that are still haunting me and sucking some of the joy from my world, no matter how tightly I attempt to seal them in the bottom most cellar of my mind. I also intend to focus on where I want my life to go from here and what I need to do to make myself the best version of me I can be.
I will back on 7th June brimming, I hope, with positivity and a much more focused idea of my life’s path in the next few years.
And finally, as always, here are:
THE DOINGS OF DOG
(dictated by Dog, transcribed by She-Who-Thinks-She-Is-Pack-Leader)
Well, my faithful followers, I’ve barely got the energy to dictate this to She-Who-Thinks-She-Is-Pack-Leader thanks to how busy I’ve been; breaking in the new fence through assiduous border patrols was tiring enough and then, if you please, there were suddenly vast numbers of tradespeople, plumbers, and other individuals that had to be vetted via vigorous sniffing and repeated sounding of The Warning BarkTM.
Your transcriber, having just inhaled the gloriousness that is Lyndsay Faye’s Jane Steel, would happily paraphrase Dog as having said “Followers, I sniffed him”.
I’m overworked, exhausted, my voice is hoarse and now She-Who-Thinks-She-Is-Pack-Leader is disappearing off and leaving me for three whole weeks. It’s just too much for a dog to bear.
Your transcriber would like you to know that at this point, Dog stalked off to her bed in what would have been an epic sulk had she not fallen asleep a few seconds later and started snoring. I feel that Dog would probably not approve of me sharing photographic evidence of this sulk failure, so obviously I’m doing so! 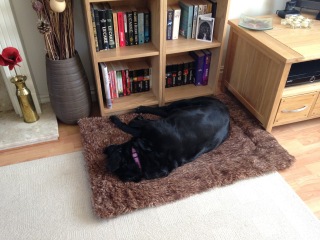 Your transcriber also wishes to point out that Dog is not being abandoned heartlessly but is staying in her house with my parents for company. She will spoilt rotten and she knows it.
And on that note both Dog and I send our love to you all, and hope that the next three weeks bring you all nothing but joy and contentment!