On 18th October 1916, exactly one hundred years ago, night had well and truly fallen over the Butte de Warlencourt when Sergeant Frederick Neville Woodger of “D” Coy, 3rd Regiment South African Infantry moved up to the front line, in the newly dug Pearse’s Trench at the base of the Butte. He would not see the dawn.

The Butte de Warlencourt, a prehistoric burial mound that in 1914 stood several hundred feet higher than the surrounding countryside, had become an important stronghold for the German front line. Fortified with barbed wire, riddled with tunnels and defended by machine guns and mortars the Butte stood as a sentinel in front of the major German trenches called Gird Trench and Gird Support*. Understandably the British command deemed it vital to capture the Butte to ensure that the gains they had made across the rest of the Somme were protected and that the German lost their bird’s eye view across the river valley.

It took until 1st October 1916 for the British and Commonwealth troops to be in a position to start an offensive to bring them within reach of the Butte and they continued to fight to take the position until February 2017 when the Germans finally retreated to Hindenburg line.  Many, many men died in the attempts to take the Butte. Lt Colonel Bradford stated, in his account of the major offensive that started there on 5th November 1916, that:

“…the Butte de Warlencourt had become an obsession. Everybody wanted it. It loomed large in the minds of the soldiers in the forward area and they attributed many of their misfortunes to it. The newspaper correspondents talked about ‘that miniature Gibraltar’.”

Sgt Woodger could certainly attribute his own misfortune to it because, having survived the horrors of Delville Wood, it was here that he fell, when the German company defending the Butte launched an assault with flamethrowers on the Allied forces and forced the South Africans out of Pearse’s trench and back to their original front line. Frederick’s body was never recovered (or if it was it was too badly damaged for identification – the leather IDs the soldiers wore back then wouldn’t not have stood up well to fire) and so he is one of the 72,194 men remembered on the Thiepval Memorial. His name can be found on Pier and Face 4C.

He was 30 years old when he died and he had been married to my Great Grandma for just over two years. I do not know what prompted their wedding in July 1914. Did they know what was going happen in less than a month? Was it a reaction to the shadow of war? Were they trying to tie themselves together before the world turned into a place where so many were to be ripped apart? Or were they blissfully oblivious to what was coming?  Did they think they were going to have years ahead of them in which to love and be loved? There is so much I do not know and no-one left alive to ask.

Other than wishing I knew what he was like as a person and what he looked like (I have no photographs of either him or my Great-Grandma) what I am most curious about is what a stock exchange clerk who was born in Scarborough in 1886 and had been living in Edmonton in London when war broke out was doing serving as a Sergeant in the South African Regiment. After all the South African Regiment was comprised of men of South African Nationality and, I understand, those men of British Nationality who were out there at the time war broke out and wanted to serve there. Since Frederick was neither of those things, no one I have spoken to in my investigations can offer a sensible explanation, and I have been unable to find any record of his signing up, it remains a mystery for the time being.

I shall keep looking for answers as I continue my research into WWI and I shall not give up hope. For now I shall share the only thing of their, which is something he never held because it was presented after his death: His Death Penny***.

I presume it was my Great-Grandma who had it mounted for hanging (and that the scroll that would have come with it is inside) as I’ve never seen another one with a fitted frame before but since I didn’t come into possession of it until my Gran died, and she never discussed it with Mum, I again have no-one to ask. But this at least is a connection to a man who otherwise might have gone unremembered and his Penny now hangs in my house, a small reminder of the huge number of men who still lie where they fell or are buried under a headstone saying “Known Unto God”.

I visited the Butte myself when I spent a week touring the Somme. 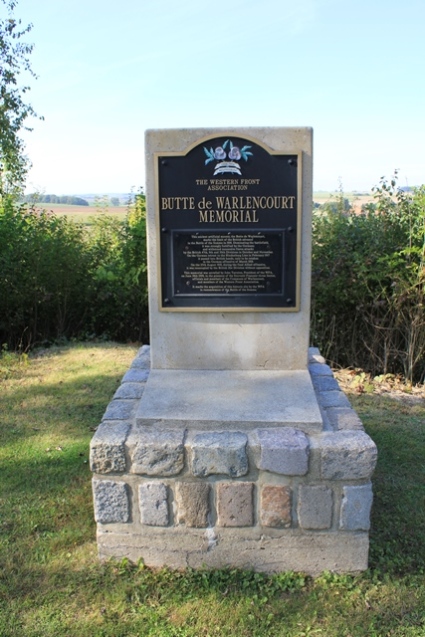 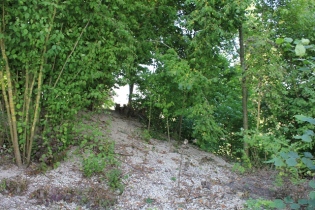 At that point I had no idea how Frederick had died (for which I’m rather grateful) but standing at the top, by the memorial the WFA have placed there, I was still overwhelmed. The courage that those men had to show to fight up such a steep and heavily fortified slope in an attempt to claim the summit for the Allies is breath-taking. Especially when you consider that the Butte now is significantly smaller than it was back then, thanks to the ravages of war, and it is only thronged with trees not bristling with wire and guns and men who know their survival hinges on the death of those who come to claim it.  I also knew that I was standing on the graves of many, many men. It was an intensely sobering experience in a week of sobering experiences.

I am not able to share my feelings about what I imagine Frederick’s final moments to have been like. His fate, and the fate of those who stood with him that night, is too horrific for me to find words to describe it.

And so – as usual when I’m not able to write for myself – I turn to poetry:

‘I have a rendezvous with Death’
by Alan Seeger****

Rest in Peace, Frederick, knowing you are remembered.

*This sentence was copied verbatim from the website of The Western Front Association, who purchased the land as a permanent memorial in 1990.

***If you’d like to know more about the Death Penny, which is more formally called the Next of Kin memorial plaque, there is an excellent article on the IWM website here.

****Alan Seeger was an American poet who volunteered to fight for the French Foreign Legion in 1914 and died at the Battle of the Somme on 4 July 1916.  There were reports of Seeger cheering on the second wave of advance as he lay dying from his wounds. The above poem was published posthumously.