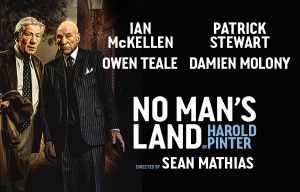 I will say up front that I left the theatre utterly confused about what the point of the play was, thus I have only given it 4 stars overall. I had absolutely no problem understanding what was happening on the stage but what I couldn’t grasp was why I was being shown it in the first place. That said, I have more than a sneaking suspicion my confusion stems from the fact that it is a Pinter play rather than anything else.  I always seem to struggle with interpreting his works.

I might have been underwhelmed by the script but that was my only issue with the play. The staging and the cast were – unsurprisingly – second to none. Sir Ian McKellan and Sir Patrick Stewart were utterly phenomenal, providing a masterclass in acting that I can only be grateful I was a witness too. Spooner and Hirst are not likeable characters but I cannot deny that they were enthralling in the hands of two of the best actors around.

Sharing a stage with two of the best known people in your profession must be a daunting prospect but Owen Teal and Damien Molony did not seem even the slightest bit cowed by the auspiciousness of the company. In fact they both matched Sir Ian and Sir Patrick for skill and ensured that  Foster and Briggs were not relegated to irrelevance as I can imagine they might have been if they had been played differently or by less competent actors.

The set was simple but effective and the hand of the director was pretty much invisible which to me is the most effective kind of directing. In other words I cannot praise Sean Mathias enough. I may not have grasped the overall point of the play but I was swept away by it nonetheless and I would happily go again if I could.

No Man’s Land is at the Wyndham until 17 December 2016 and if there are still tickets available, you can find them here.

2 thoughts on “Theatre Review: No Man’s Land at the Wyndham Theatre”