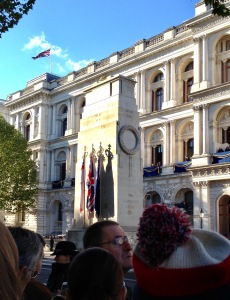 I have been attending the Remembrance service at the Cenotaph for many years now; hustling myself out of my warm and cosy hotel room at 7am to zoom down to Whitehall, often in the company of heavily armed police, to nab a spot right next to the memorial where the Queen and so many other dignitaries will later pay their respects. I’ve been very lucky in that every year that I’ve attended so far has been blessed by clear skies and sunshine making standing in one spot for nearly six hours as pleasant as it could possibly be.

It’s a very singular experience, rather different to how it appears on the television broadcasts. For one thing you don’t hear any of the television commentary, or the individual interviews with the various service people who are part of the march past. Instead you watch the final sweeps of the area by the security services and then the various branches of the Armed Forces march into place around the perimeter. Jostling in the crowd, snapping various shots of what is going on, you end up chatting to the people around you, learning why they’re there, who they’re remembering, and all sorts of other things as well.

Eventually the marching band takes up position to the south of the Cenotaph and you start to see various people peering out of the windows in the Foreign and Commonwealth Office (where the great and the good are having pre-service warming drinks). The band do a great job in playing songs that you can join in with, taking your mind off the fact that despite the sun it’s still really bloody cold standing still and your feet and fingers are in danger of going numb. These songs, usually related to the forces in some way, have meant that over the years I’ve had the pleasure of teaching people the words to Tipperary, Pack up your Troubles, and Hinky Dinky Parlez Vous amongst others; songs which were first taught to me by my Gran, who was eight when WWI broke out.  By this point slim leaflets detailing what will happen during the service have been passed out to everyone who wants one and it’s getting on for 10.30 and the level of anticipation in the crowds has reached its peak.

The service itself is really rather sombre and very moving. I usually get the first tears in my eyes when the band start to play Nimrod. If I was a better music student I’d probably be able to analyse just why that combination of chords turns me into a sniffly mess but as it is, I just know that it just pushes all the buttons in my head that make me remember all the horrors of war.

From where I stand it’s usually possible to get a good view of the Queen, Prince Phillip, Charles, Andrew, William and Harry through the thicket of Busbies in front of me and each year I come away with a different impression. This year it was that they all looked slightly more melancholy than usual and Prince Phillip, especially, looked really rather tired. Given the mess that the world has become in the past twelve months, I can’t say I’m that surprised.

Once the spoken part of the ceremony is completed and the Queen has gone back inside, the march past takes place. For me this is the highlight of the morning, a chance to recognise those who served and watch as they remember their comrades who are no longer with us. The television footage usually cuts off well before the march past is finished but that doesn’t mean any of us go anywhere. By the time the last of the marchers have moved off towards Horse Guards, marching band following behind and the troops around the perimeter have filed off too it’s usually well past midday. Then the barriers are removed and you’re free to go and look at the wreaths and then head off to find somewhere warm to have a drink and go to the loo (not necessarily in that order). 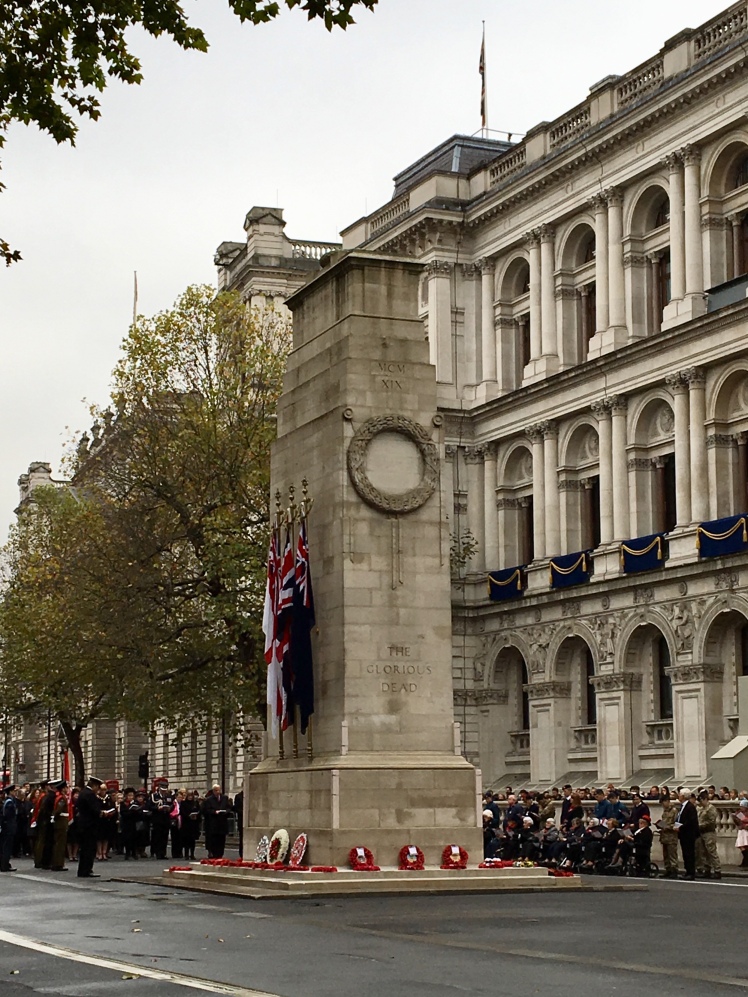